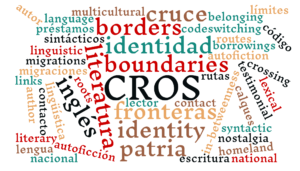 The research group CROS, founded in 2015, brings together experts in linguistic and literary analyses of hybrid texts, attesting language contact between Spanish and English. It addresses several research lines.

The group aims at contributing to a better knowledge of the impact English and the North American Society have on the literature production of emigrated Latin-American authors. In concrete, the same texts are studied from both a linguistic and literary viewpoint, after which the research results are compared. As such, the group wants to provide a better understanding of the social and linguistic functions of code-switching and related phenomena in Latin-American narratives. This comprises the following research objectives and questions:

The group wants to contribute to the ‘measurement’ of the impact of English on Spanish in Spain. In Spain, there is a growing presence of English in mass media, education etc. and hence an increasing influence of the Anglo-Saxon language and culture. The linguistic outcomes have been the subject of some controversy: some believe that the effect on Spanish syntax and semantics is real, especially among younger generations, whereas others situate the impact mostly at the level of the lexicon. Our research looks into the effects of language contact at various linguistic levels:

Another research line focusses on the effects of situations of contact between Spanish and other languages and cultures (such as Basque, Catalan or Galician in Spain, or Nahuatl, Quechua or Portuguese, Italian and German in Latin-America). This also implies the development of Creole languages. To what extent do the outcomes of these diverse situations of language contact run parallel with those between English and Spanish?

A part of the investigation is dedicated to the effects of multilingualism and intercultural pragmatics, and more particularly the acquisition of Spanish as L2/L3/L4 and the influence of the native language (such as English or Dutch) on the use of Spanish.